For someone who used to think about how extreme it would be to go to the movies on your own, I definitely have surprised myself. Last weekend I went clubbing in Nagoya. Alone.

The conclusion – it was one of the funnest nights I’ve had here. And here is a brief summary of the two clubs I visited… Check them out if you are in the area!

After killing some time at Hub Pub in Sakae, I headed over to ID Club to meet one of my friends. He wasn’t there and after 15 minutes, and just when I was about to bail, the manager came up to me and said he’d let me in as a guest. How could I knock that back?!? So I bundled up my courage, thought what the hell, and rolled into the club.

Imagine six floors of different music pumping, full of people dancing. It was a little difficult at first, as being a western girl in a club I’m Japan, I attracted a lot of attentions and found it difficult to blend in. Targeting groups of girls I would try and join their groups and dance.

If you pay cover charge you get drink coupons, however I thought the drinks were really reasonably priced. A vodka based drink was only ¥500 – I’ve paid more than that at a pub! The DJs on the floors which I spent most of my time on were pretty good. They mainly focused on English songs, throwing a few Asian pop songs into the mix which seemed to excite everyone.

It was a pretty safe atmosphere with bouncers situated on every floor.. Some were definitely more approachable than others, however I felt that they were nicer than at the next club! There were lockers to keep all of your bulky items (perfect for coats in winter) and bigger bags. The only negative about ID Bar is the closing time, 1am. Overall it was extremely fun, and I will definitely go back!

This club is open until 5am and it seemed as if the crowd from ID Bar had all come to this club with the long line. However if you are a girl you get to use the fast tracked lane and not have to wait. You most likely will also get free entry… Too bad boys!

This club is more of an open plan club, with a very small dance floor. You can dance in the aisles but you feel like you’re blocking the walkway and also there is a small stage where girls can dance on. The drinks are only ¥500 again, but when I paid using a 1000 note I got back a coupon for another drink instead of change… Which I forgot about and lost so wasn’t a big fan of that system!

The positive thing about this club is it stays open to 5am so you can definitely get your dancing fix! Like ID bar the music was mainly English pop/ RnB songs with a few Asian one hit orders thrown in. I didn’t think the DJ was as good as at ID Bar, but from what it looked like you could request songs which could be fun.

Once again this club had lockers.. I just wished I used one so I didn’t lose my jumper! The majority bouncers here weren’t as friendly (Eugene was an exception) ,barking something at
me when I simply asked a question.

I look forward to trying out the rest of the nightlife in the weeks to come! 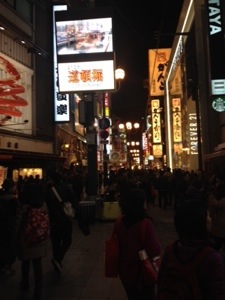