These are words I never thought I would say: “I went to a penis festival this weekend”.

The Hōnen Matsuri, is a fertility festival celebrated every year on March 15 in Komaki, Aichi. It is a day where the usual Japanese modesty goes out the window and giant wooden penis statues are carried through the streets, food stalls are selling everything and anything penis shaped, and people of all ages from children to adults can be seen walking around innocently sucking penis shaped lollypops. Hence the foreign adaption of the festival name, ‘The penis festival’. 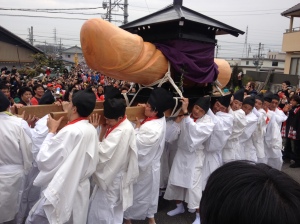 The parade started with the Japanese demon, Tengu, walking through the streets on the traditional wooden sandals, which had pieces of wood underneath them like stilts. The streets were cleansed with salt thrown from another parade member making way for Tengu to proceed.

The procession continued with statues that looked like they weighed the same as a small car being carried on the shoulder’s of about 16 men, penis flags being waved and free sake and dried squid being handed out. But it didn’t stop there. Towards the end of the parade women nurturing wooden penises the size of a small child, the way they would hold a baby, came waltzing down the street. They walked in front of the roped off crowd offering for people to rub the small statues. “Touch it, touch it” said my friends, so going along with everyone else I gave it a little rub. I instantly regretted it when they told me this was a festival about fertility and rubbing the mini penis would give me good luck for my ‘harvest’. 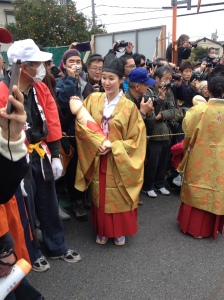 The highlight of the parade, the huge wooden penis float started to make its way through the crowded streets to the fertility shrine. This float was carried by approximately 20 people. screaming and shouting chants. At certain points along the parade route they would stop, change people, then run around in a circle one way, stop then run around in a circle the other way, holding the statue on their shoulders the whole time. They would then swap back and start lifting the statue cheering again before walking on making their way to the shrine. It was incredible – most of us spent our time watching it in disbelief then laughing.

The festival was an extremely interesting experience. There were souvenirs of various penis and vagina shaped objects including sake sets and wooden bottle top carvings, food, drinks and then the mochi throwing session which looked like a pack of seagulls all trying to catch the one hot chip at the beach as the crowd scrambled over each other to catch these unwrapped, mochi (rice cakes) being thrown at them from an elevated platform. It’s a great day out with your friends, and definitely nothing like you will see anywhere else! 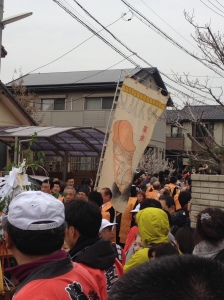 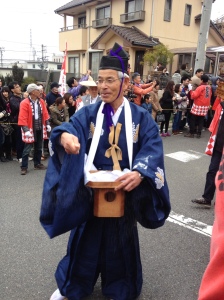 3 thoughts on “The penis festival…”