I am a people person. There’s no question that I’ve always worked hard to surround myself with family and friends, and anyone can see that I thrive on having them close by. And for the most part it works fine…dinners, movies, games nights, drinks and so on, until I move away.

This is where it gets problematic. Not only moving to a new country or place where you don’t know many people, but also the fact you are moving away from so many that you have grown to love, trust and rely on as your close knit circle. This happened to me when I moved both to and from Japan, where I did meet a fantastic group of people who I have some of my favourite memories with, and who I hugely miss. And of course, there’s everyone back home in Australia (or wherever they are in the world at the moment).

Hong Kong is quite the friendly place, however sometimes the locals will distance themselves from us because of the language barrier – the total opposite to me who tries to act things out or explain using different words! The other thing we’ve run into is the reluctance of some long-term expats open to forming new friends. Because Hong Kong is a transient city, and no one really knows how long they will stay for when they first arrive, some people don’t want to form a strong friendship in-case you leave soon after arriving.

Luckily for us, we knew some people when we arrived here, and have had a great Easter weekend full of friends, food and laughs. It has definitely been nice having some friendly faces here, being given the top tips, and being introduced to their circles of friends. And for a weekend which I usually feel homesick over if I’m not home, I had a great time at dinner parties, hiking and exploring our new neighbourhood!

This week we ticked Tai O off our list and trekked the 16km along the ancient passage for villagers who commuted between Tung Chung and Tai O. The walk, which was paved for the most of it, was quite a nice relaxing walk with a few hills, but not too many. It ran through some small abandoned looking villages, some which are still lived in today, forest like terrain and along a beautiful coast line which you could see the bridge they are building from Hong Kong to Macau.

It did take us a good four hours to complete, but arriving at the Tai O fishing village made every metre worth it. A lot of the village is built on stilt houses along the waterways, home to the fishermen. Usually they would use boats to get around, but the low tide had left a lot of the boats on the floor of the river, and they won’t be moving for a little while. Walking through the stilted homes you could look into some – the way they were set up were very similar to an actual boat. From the wooden floors, to the beds and the kitchen. It was fascinating!

The other thing that got to us was the feeling of community. I’m not sure if it was just because it was the long weekend, but families were all enjoying dinner together, Cantonese music was blasting, and cheers could be heard ringing through the air. The vibe was unlike any we have really come across here. We definitely want to go back when it’s high tide, and possibly stay at the local bed and breakfast! 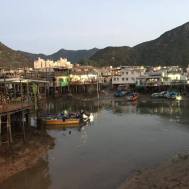 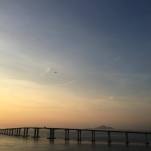 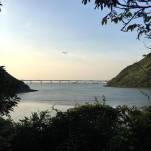 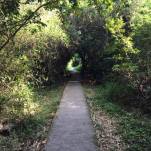 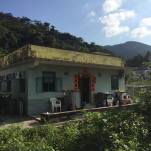 Wanting to explore our new area we headed to Sai Ying Pun for some brunch – one of our new favourite eating places. Walking off the ginormous feast of mushroom soup, smoke salmon salad and shakshuka, we found ourselves at the Sai Ying Pun Memorial Park, a big outdoors space next to the harbour. It was so nice seeing everyone enjoying the nice weather and being outdoors either having a picnic with their friends, playing soccer with the kids, or reading a book solo. We opted for a seat near the water, enjoying the sun on our backs and watching the ferries coming in and out to Macau. It was such a nice spot to sit back and enjoy Hong Kong city life.

The streets of Mongkok

On a hunt for some new work shoes for Jackson, we headed over to Mongkok. Given it was a long weekend we were expecting the crowds, but what we weren’t expecting was just how much the streets would come alive with karaoke, branded campaigns and street performers. With the heat and humidity on the rise, I would have thought most people would stay indoors, but instead we were mesmerised. In particularly we stood watching this one performer for at least five minutes as he drew up the crowd, left us waiting in anticipation and then finally ran and jumped through a hoop which was suspended. We were in awe by his performance, which essentially was him dancing to his favourite Michael Jackson song over and over, making people think he was going to jump, then pulling out last minute. It just goes to show, you don’t have to go far for a great experience in Hong Kong! 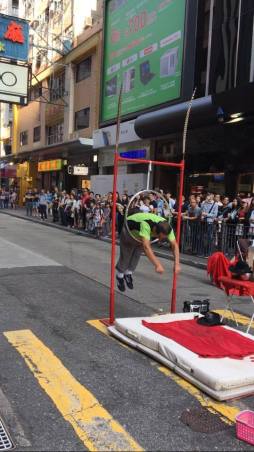 Until next week, that’s a wrap!