There are definitely pros and cons of staying in hostels. Pro, meeting new people, con, roommates turning the light on at 5am!!! After a huge day yesterday I could have spent half of today in bed, but instead I mustered up all my energy to prepare myself for another big day of sightseeing.

Today I bought the bus ticket to get around the city instead of the Subway which I found to be pretty handy… And apparently it was on sale at my hostel for only ¥550.

First stop of the day was Arashiyama, a little suburb nestled by the side of a mountain. I felt a bit lost when I first got there, I got off on one side of the river and headed across the famous Togetsukyo bridge to hopefully find the bamboo forest. Instead I found a strip of ice cream shops which led me to the train station. I didn’t want to go to the Hankyu Arashiyama train station, but I wasn’t so upset about finding the ice cream shops! With a chocolate and vanilla soft serve ice cream in hand, I headed off again. Before crossing over the main bridge again I found a little one I wanted to have a look at… The sight kind of reminded me of Venice a little. It was a little canal off the main body of water with men in boats that yet were standing up in to paddle/steer. It was really pretty!

And right next to this was a little shrine and the monkey park. The monkey park was a lot of fun… If you like monkeys. It was pretty cheap to get into, only costing about ¥600. The monkeys were at the top of the mountain and the climb was a little bit tough on the knees (especially my torn ligament) but the path is mainly dirt slopes and concrete stairs so easy enough. There are interactive fact boards along the path which you can stop at to catch your breath and read some info about the monkeys you’re about to see. I would say the climb took me about 20 to 25 minutes to do… And that was with stopping! I would say it was a moderate level track, but you could definitely take your time and do it slower.

Near the top of the mountain I spotted the first monkeys playing with each other in the tree. I looked at the top of the stairs and saw the rest of them…and there were heaps! There is a little hut in the middle called a ‘resting house’ which has windows made from wire so on the inside you can buy some cut up fruit for ¥100 and feed the monkeys from the safety of the house.

It was so cool… they have little child like hands. They are so detailed like human hands and if you had your eyes closed you might think it was just the hand of a hairy child. I loved watching the little fingers come through the wire and grab the food. They were greedy though, if you were feeding one and another one came to get some food also, the first one would start shouting and chase the other one away.

The top of this mountain also had a really nice view overlooking Arashiyama and Kyoto further out. I stood there for quite some time looking out over the city with the monkey who was lounging on the binoculars.

On the way out I grabbed a map from the monkey park and finally had my bearings…next stop was the famous Tenriju-ji, another world heritage temple in Kyoto. To get into the temple and garden cost ¥600. The temple was nice, but it felt that I was too tired to appreciate it entirely. The garden however I enjoyed because I could sit down and look across the pond with the huge fish in it and colourful flowers in the background with mountains in the distance. If you exit the garden through the north exit you will find yourself in the bamboo forest… An amazing sight with bamboo shooting straight up on either side of the road for as far as you can see!

The last thing I was able to fit into my day before making the trip back home was Nijo-Jo, another World Heritage site. It was beautiful. There are two palaces in the grounds as well as massive gardens which were a beautiful sight. The castle itself had two full moats, the first moats that I’ve seen in Japan. 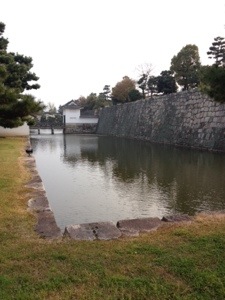 It took me over an hour to walk through the grounds and palaces themselves, finishing with some type of rice balls in a sticky sauce from the food stands near the exit (I think these were just here for the Cherry blossom festival and are not a permanent set up within the castle).

I spent the remaining hour and a half in Kyoto resting at Starbucks and eating yummy Ramen on the 9th floor of Kyoto Station reflecting on everything I’d seen and done in just 36 hours!

I will definitely be back to Kyoto!