Always looking for something new to do in the Chubu area of Japan, I decided to try out the Asahi beer factory tour. After all, during my time living here in Japan I have tasted the beer on numerous occasions, but how was it produced, packed, distributed and so on I was unsure of.

The brewery in Aichi is only a short JR train ride from Nagoya station on the Chuo main line, getting off at Shinmoriyama station. The brewery is about a 10 minute walk from the station.

We made a mistake in that we didn’t call ahead to see if they were running tours in English when we were coming, and so our tour was in Japanese. Slight issue seeing as none of us who went could speak Japanese, but it didn’t really impact our experience. We received a pamphlet with some of the information in English, there were some signs in English, and the rest of it was pretty self-explanatory.

My favourite part was watching the beer cans be filled with the beer, and then go through a machine which welded the lid on within seconds. It was incredible to see the rate that the cans were filled, lidded and then packed into the boxes. I could have stood there for such a long time watching the fascinating process, but we got moved along. 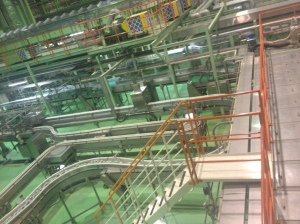 The tour lasted for approximately 75 minutes, which included a tour of the grounds, and free beer testing at the end. Now, when I say free, I’m not talking about little samples. You could have three schooners of beer – this gave you the option to try the three different types of beer they had on tap, or you could stick to the one of your choice. You got to drink these sitting in a really cool beer hall which had a keg over the bar. Great atmosphere! 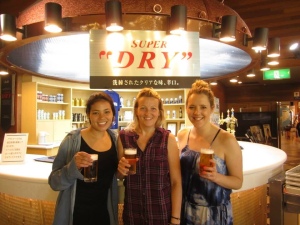 If you are looking for a relaxing day, but still a bit touristy in the Nagoya area, you can make a reservation at the link below, but keep in mind that if you want a tour in English you also need to call the reception to advise them of this. 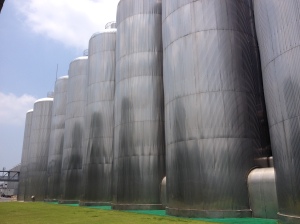